It's been quite a while since my last armour kit, and I'm having a crack at a cheap and quick kit to blow the rust off my old skills.

I wanted to do something fun, but also something that wouldn't require too much research as speed was one of my goals with this one.

I came across this kit on eBay for a little over $10, and thought it would build into a decent kit with a fun subject that I could take some artistic license with as its a 'what if' tank. 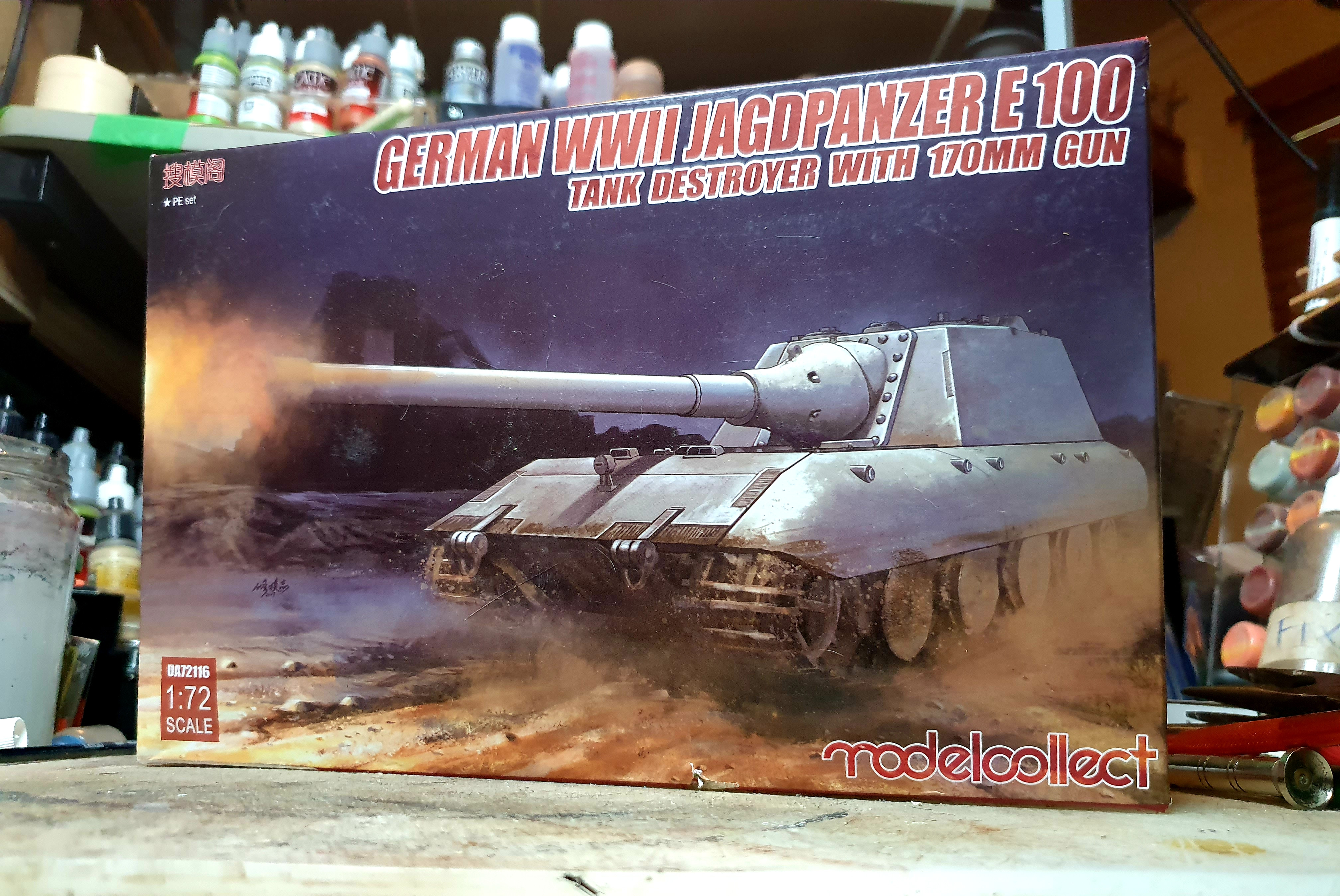 I wanted to add some texture to the mantlet, and the ball mount as similar structures on other tanks were cast - 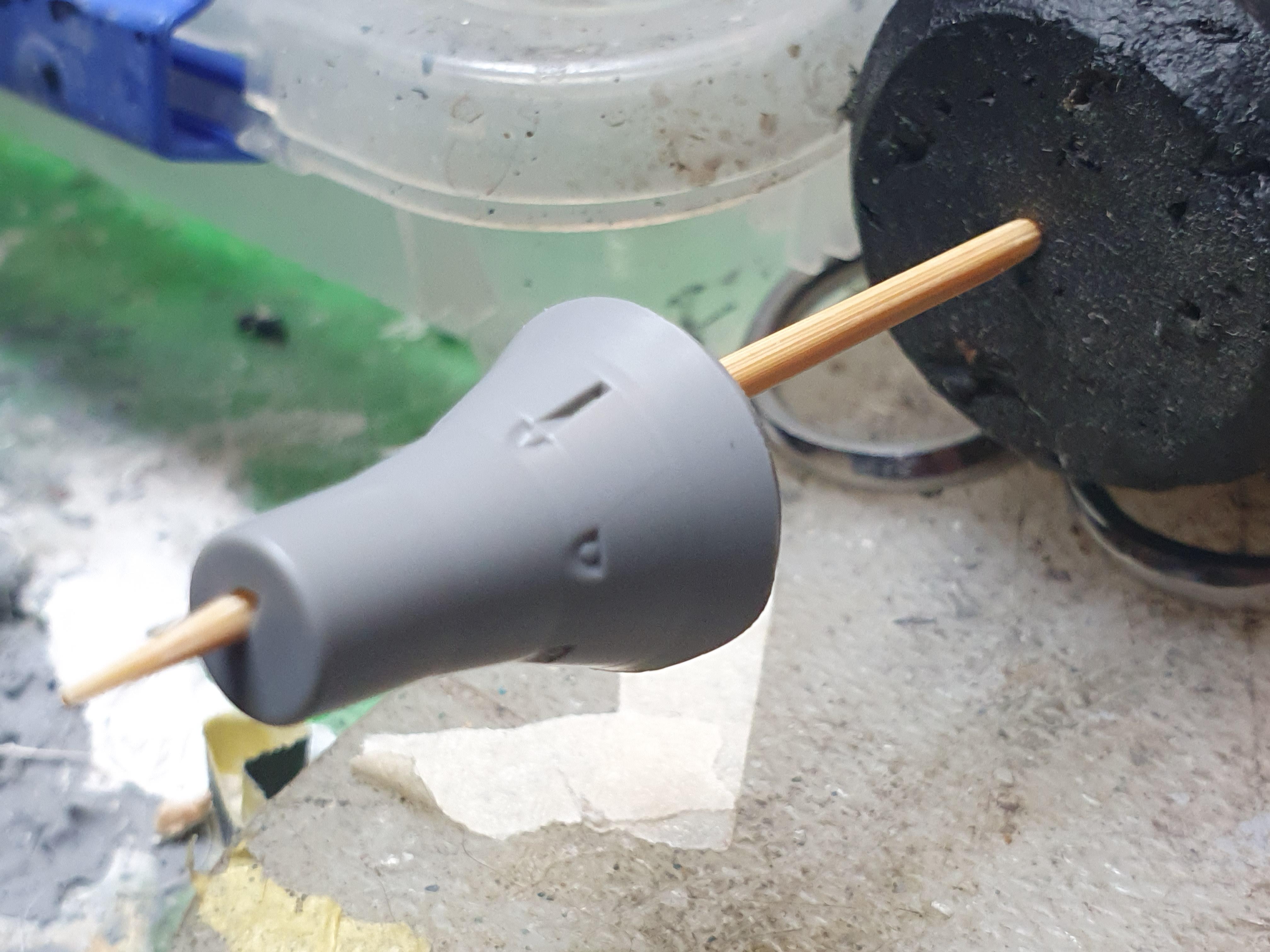 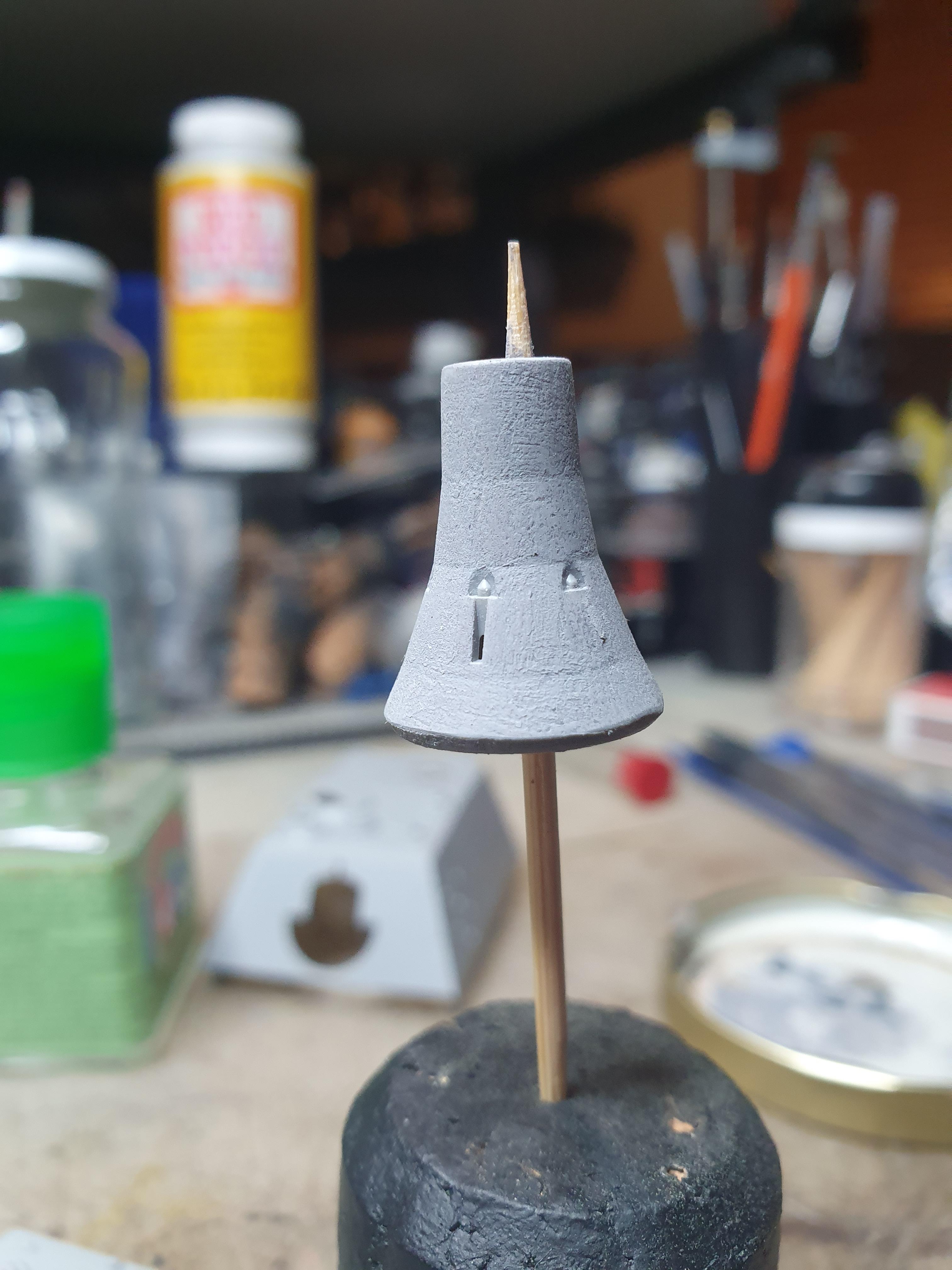 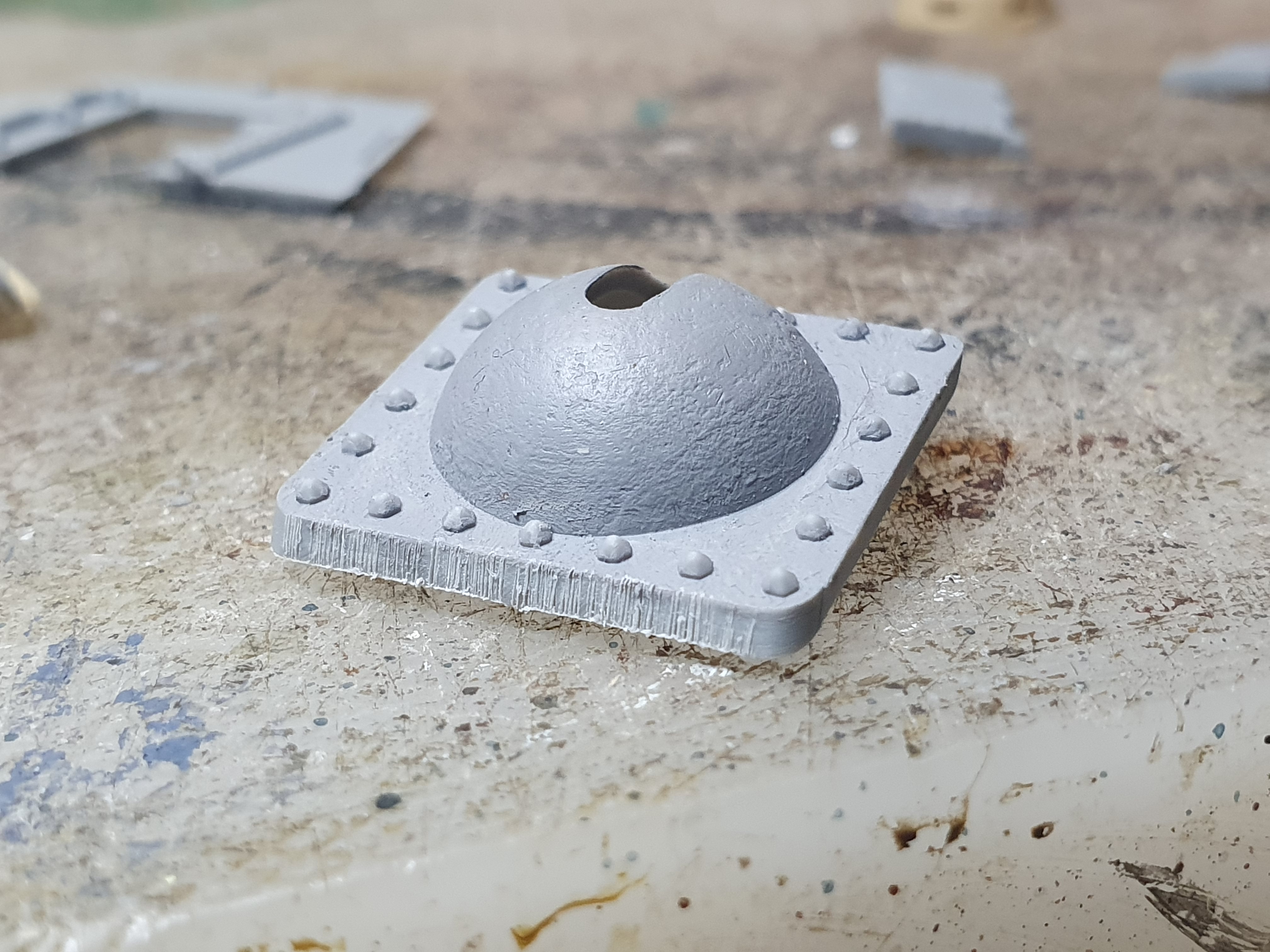 I also added some flame cut marks on the edges of the ball mount plate, and to the armour on the turret as this texture was entirely missing from the tank. 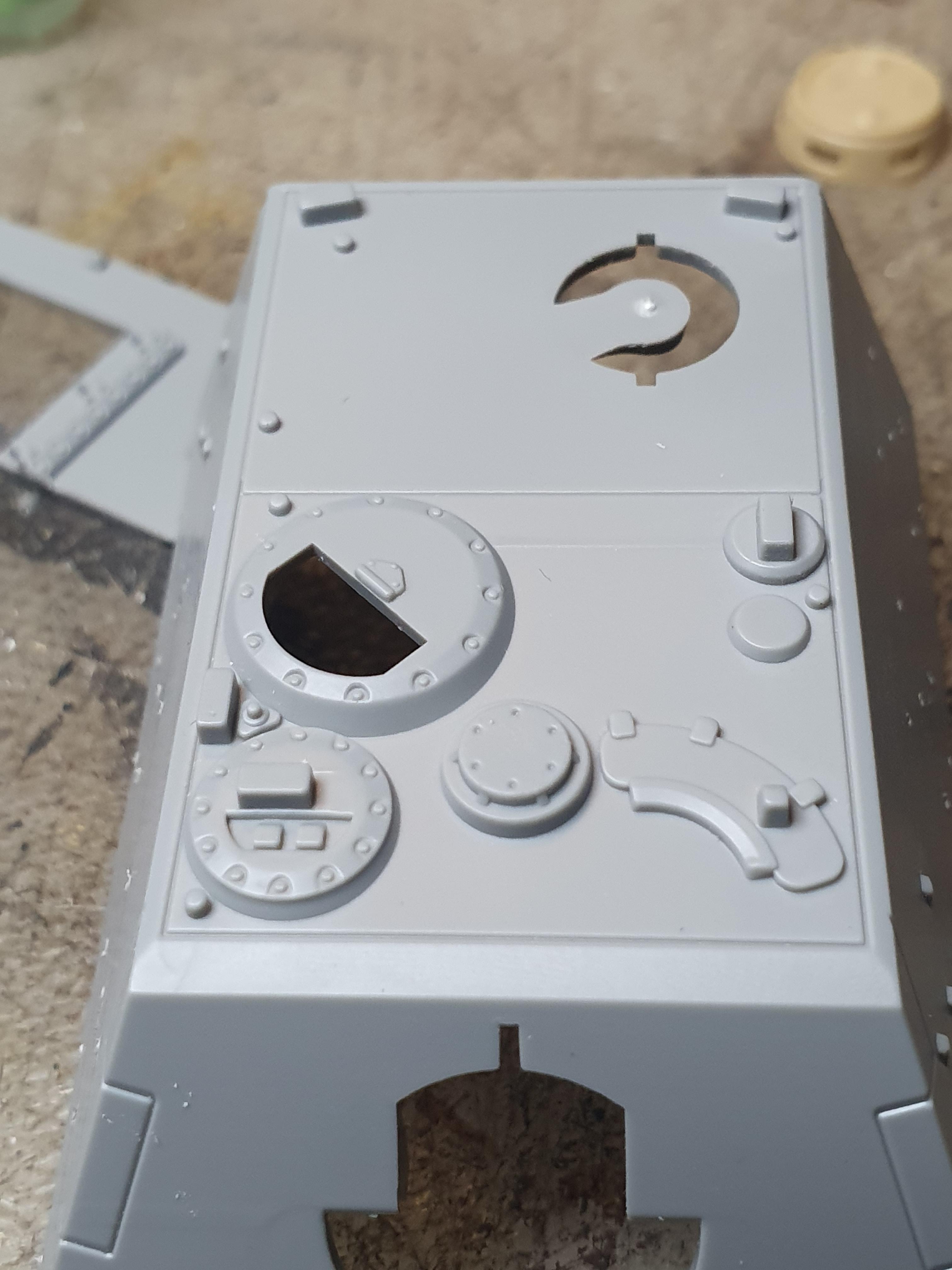 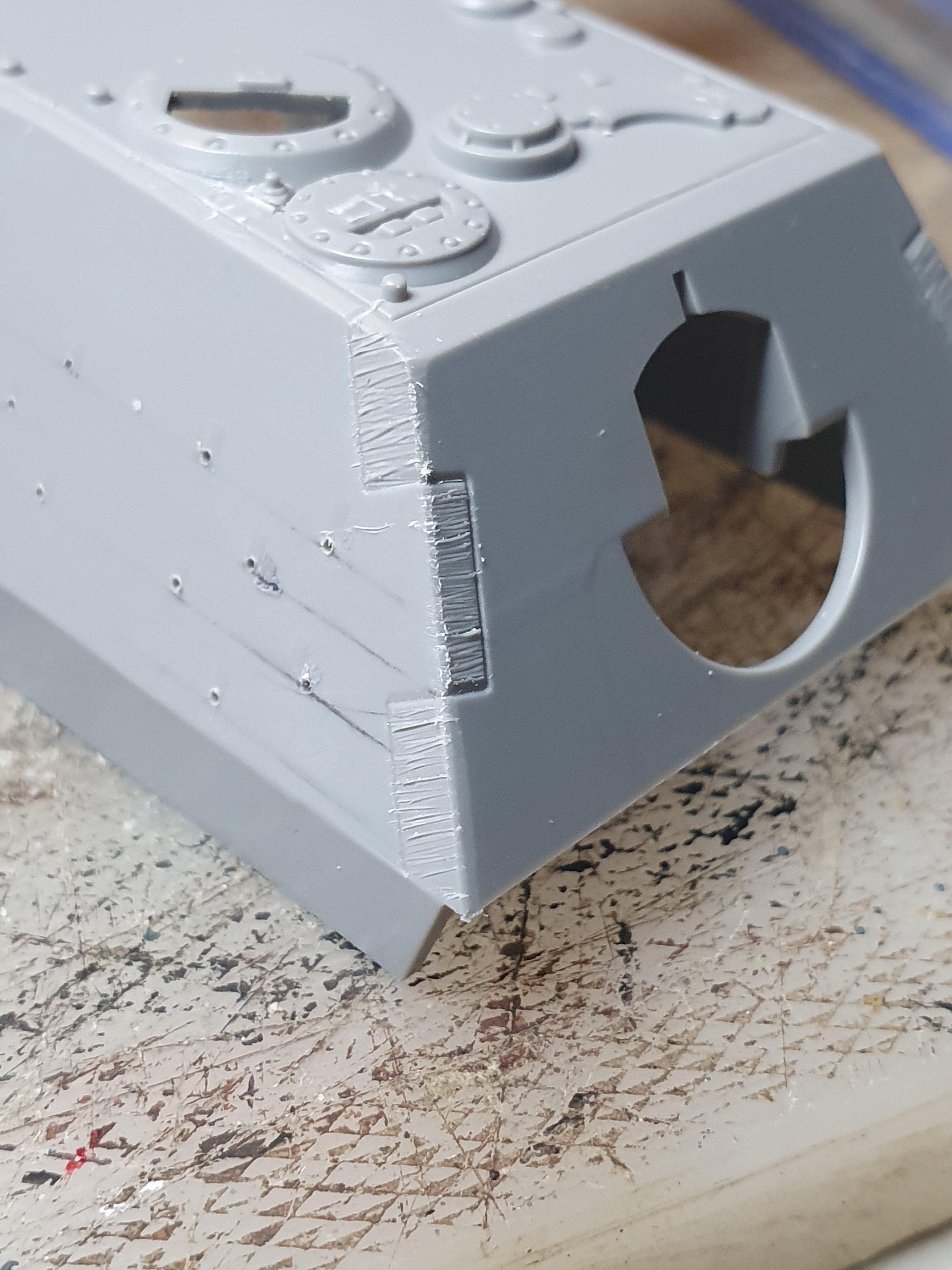 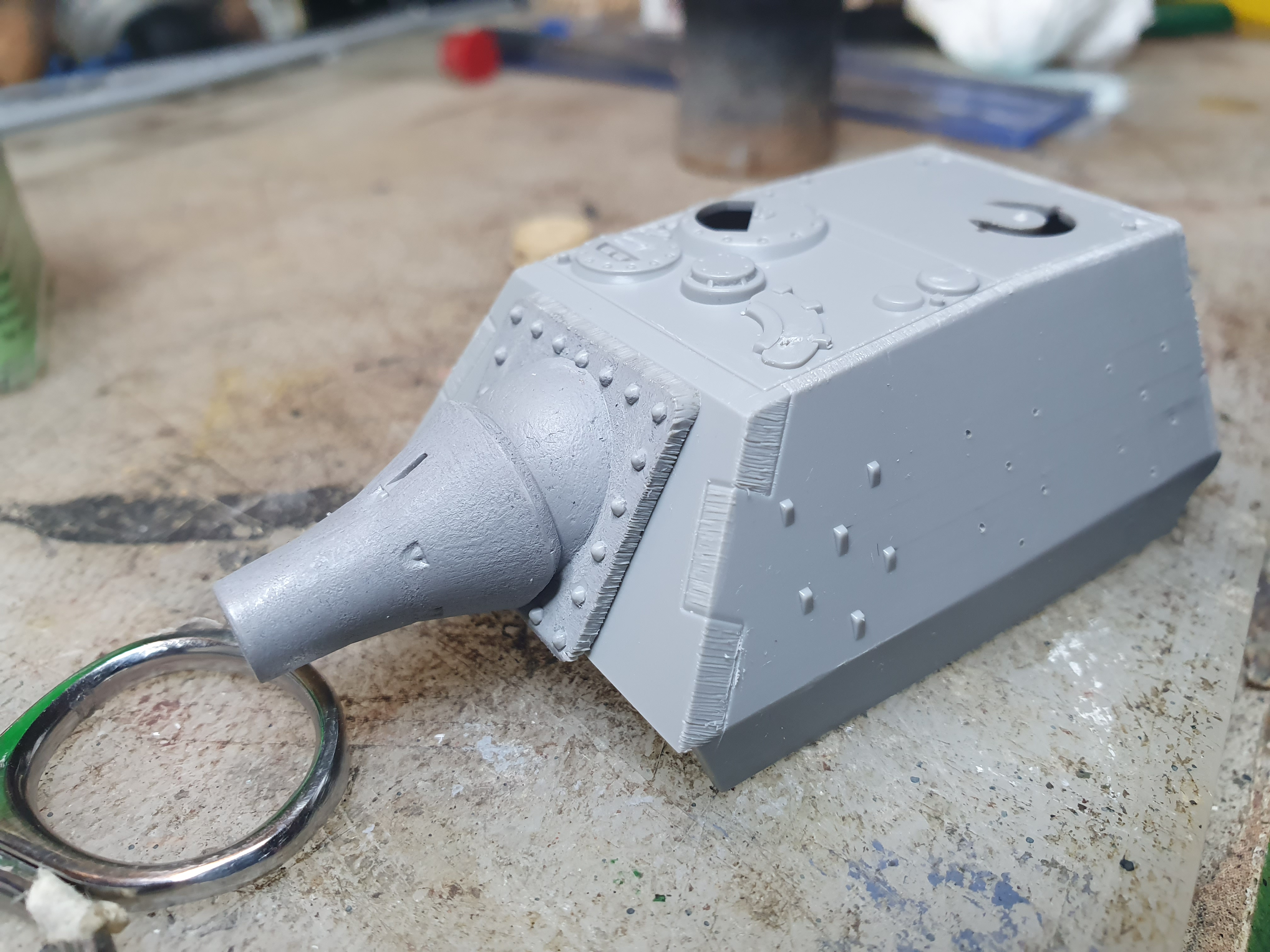 Seeing these larger and zoomed in images has allowed me to see that I need to do a little clean up on the flame cut marks as I look to have over shot the knife stroke in a few places...

This kit has 'bumps' along the side of the casemate, intended to attach spare track links. I didnt want to have the sides covered in spare tracks, and these bumps looked nothing like the fairly common hooks seen on the sides of king tigers and Jagdtigers. I added some hooks using copper wire.

Also, I should mention that I substituted the cupola of this vehicle with a spare Panther early cupola - this kit has a secondary gun in a smaller rotating turret where the cupola sits, and i just didnt like it. 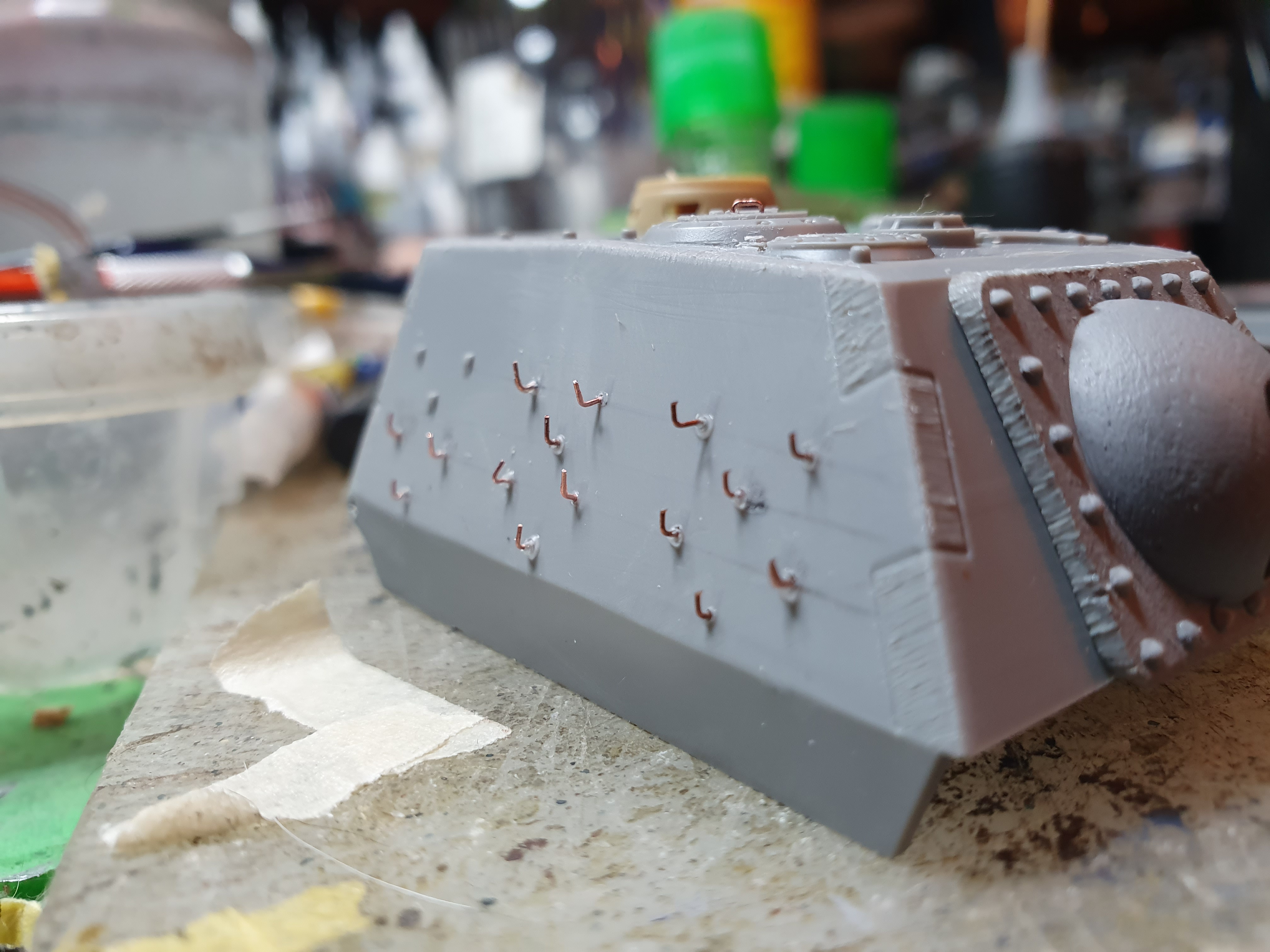 Removing the secondary gun has left the vehicle with no AA, or anti-infantry weapons, so I will have to figure something out. I was thinking of adding an MG32 to the Panther cupola, or just setting up a bipod mounted MG on the roof. I like this vehicle being something quickly assembled for the fictional Berlin counter maneuver of late 1945...

REPLY & QUOTE
"Artillery adds dignity, to what would otherwise be an ugly brawl."

Cheers Gaz! It's been a fun little kit so far!

I like to create loose fitting backstories for my models, nothing too in depth, but for this one being a fictional vehicle I was able to use a little more creative license. I decided that, in later 1945 with the war still ongoing, the allies would still have air superiority, though ground forces would have to be slowed for some reason. For this reason, the tank would forgo anti aircraft defences in exchange for German technological advances. In this case, night vision. During the day, the tank would need to be hidden away out of view of enemy spotting and attach aircraft but at night it would have near free reign.

The base would be the tank sitting in hiding awaiting the night time to go hunting.

The kit is based on the E-100, and came with a heap of unused parts including not one, but two night vision mounts so I decided to use both - 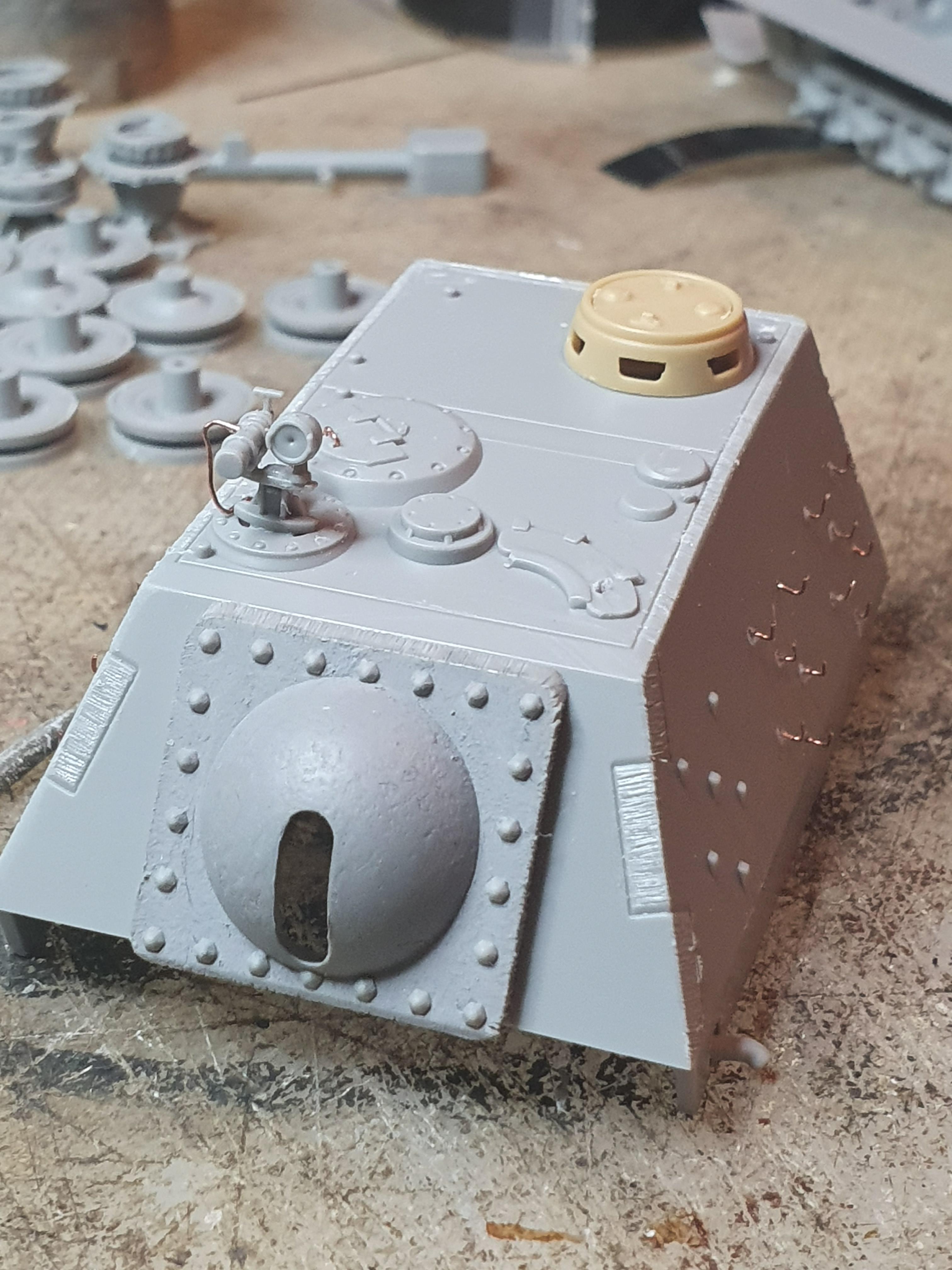 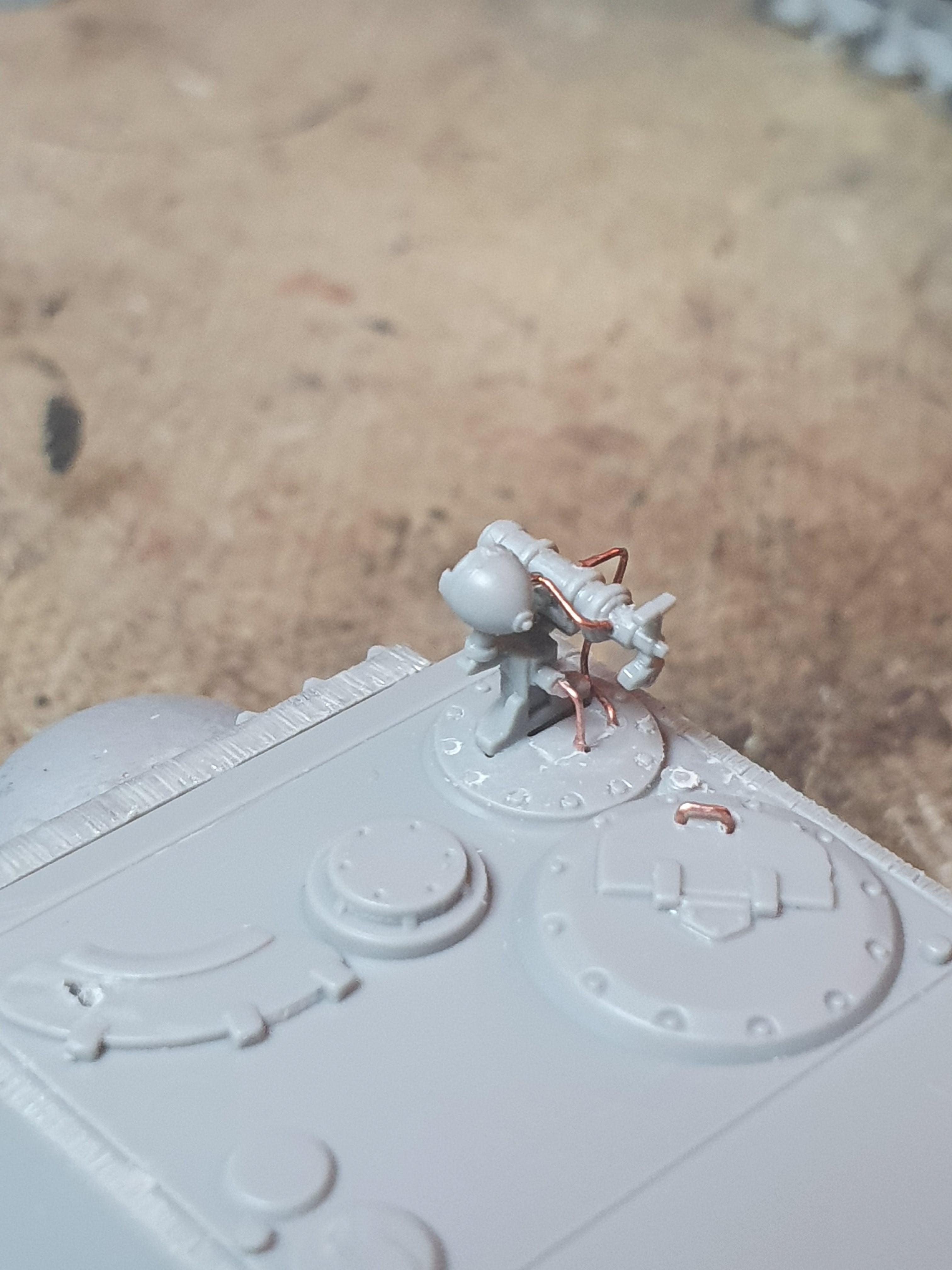 I used the second one for the driver - not wanting to give away their position to aircraft, there is no headlight but instead an IR spot light, and IR receiver scope in place of the drivers vision block: 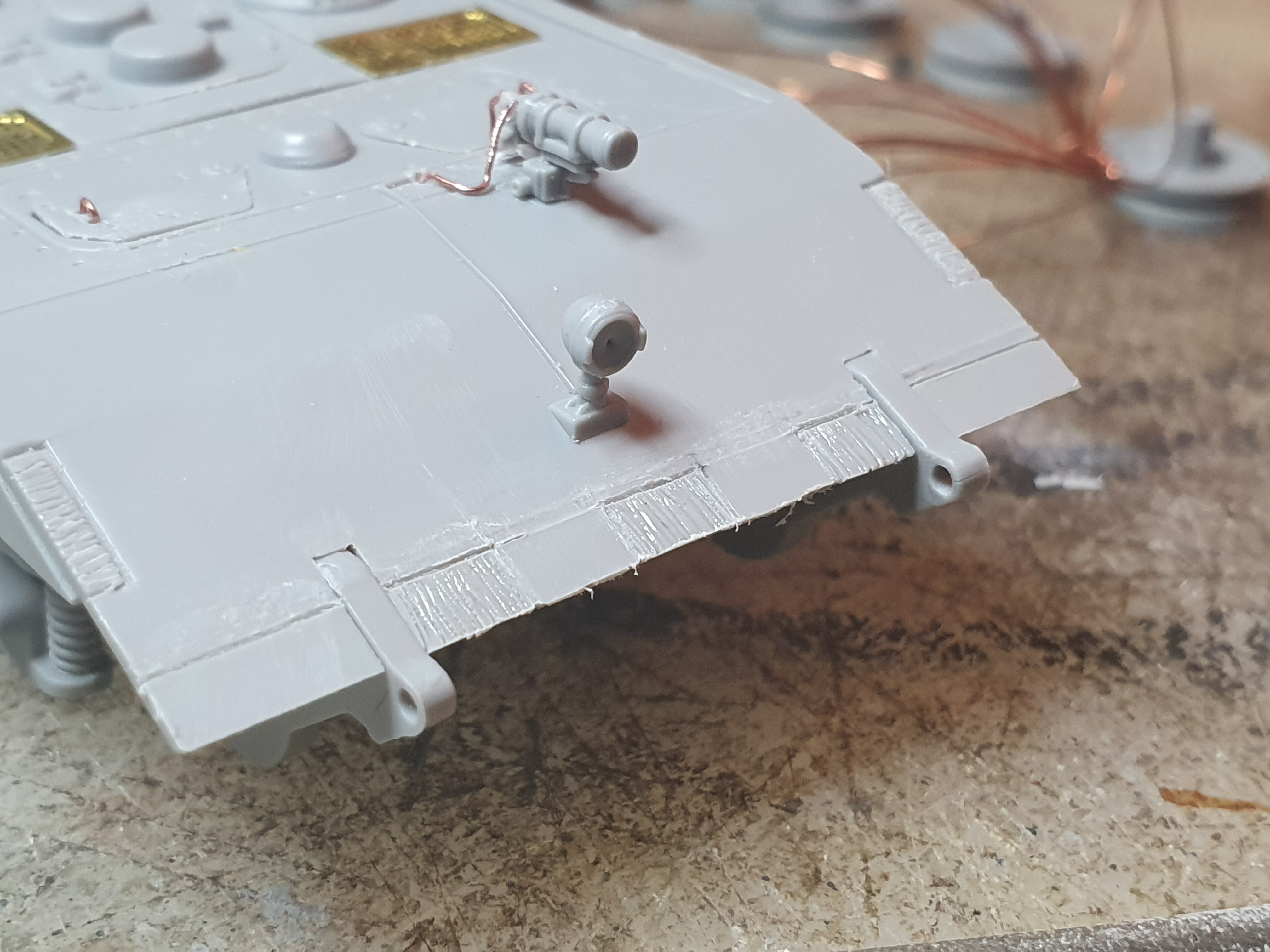 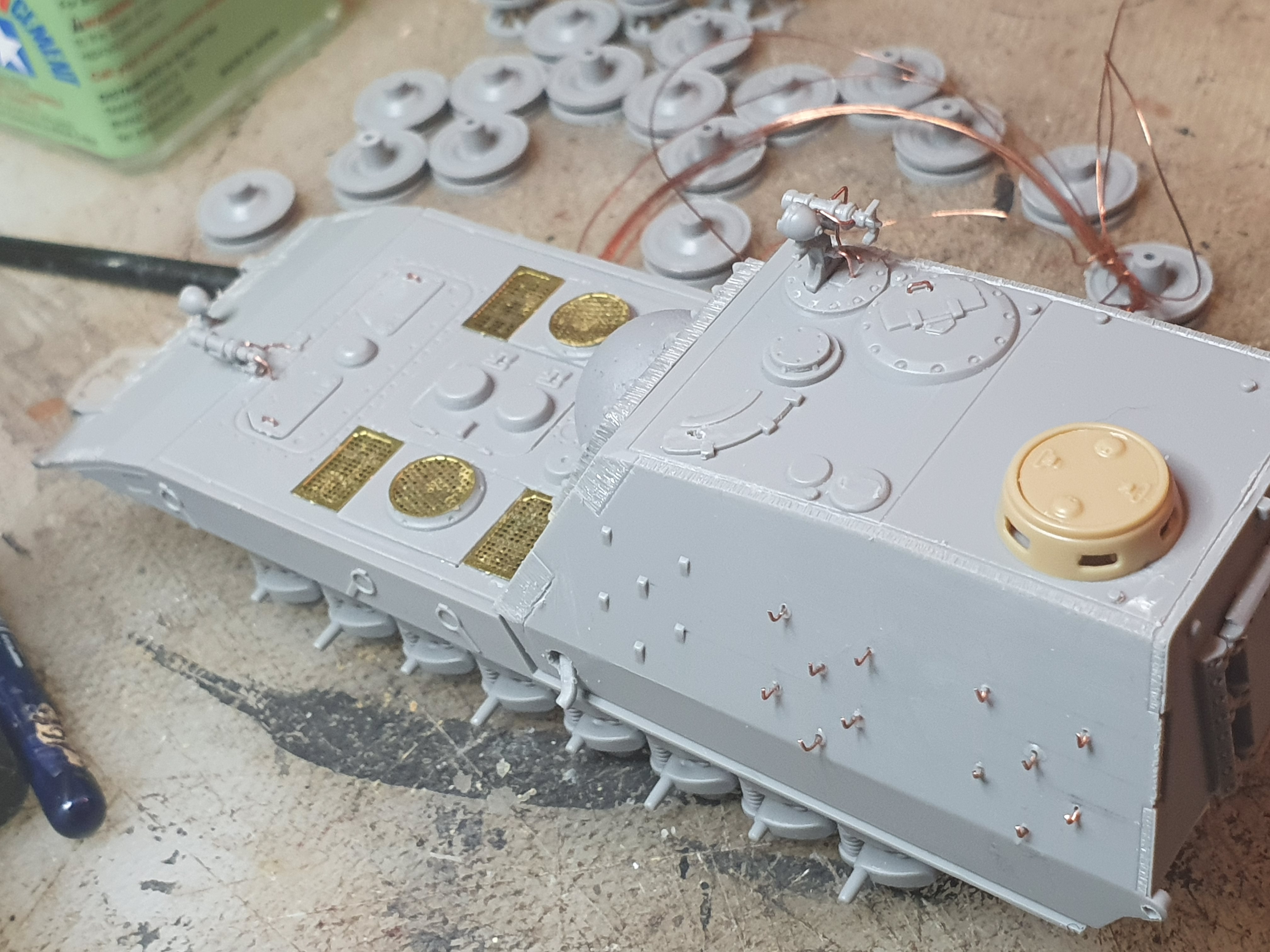 You can see in the second pic that I have popped the PE grill covers, and replaced all handles with copper wire.

I also found it odd that this vehicle didn't have exhausts at all, then I realised the engine is in the middle of the vehicle. So this got me thinking, where would the exhausts go? In the art, it seemed to be coming from under the fender, so I assumed there must be some sort of exhaust under there - so this is what you can see here: 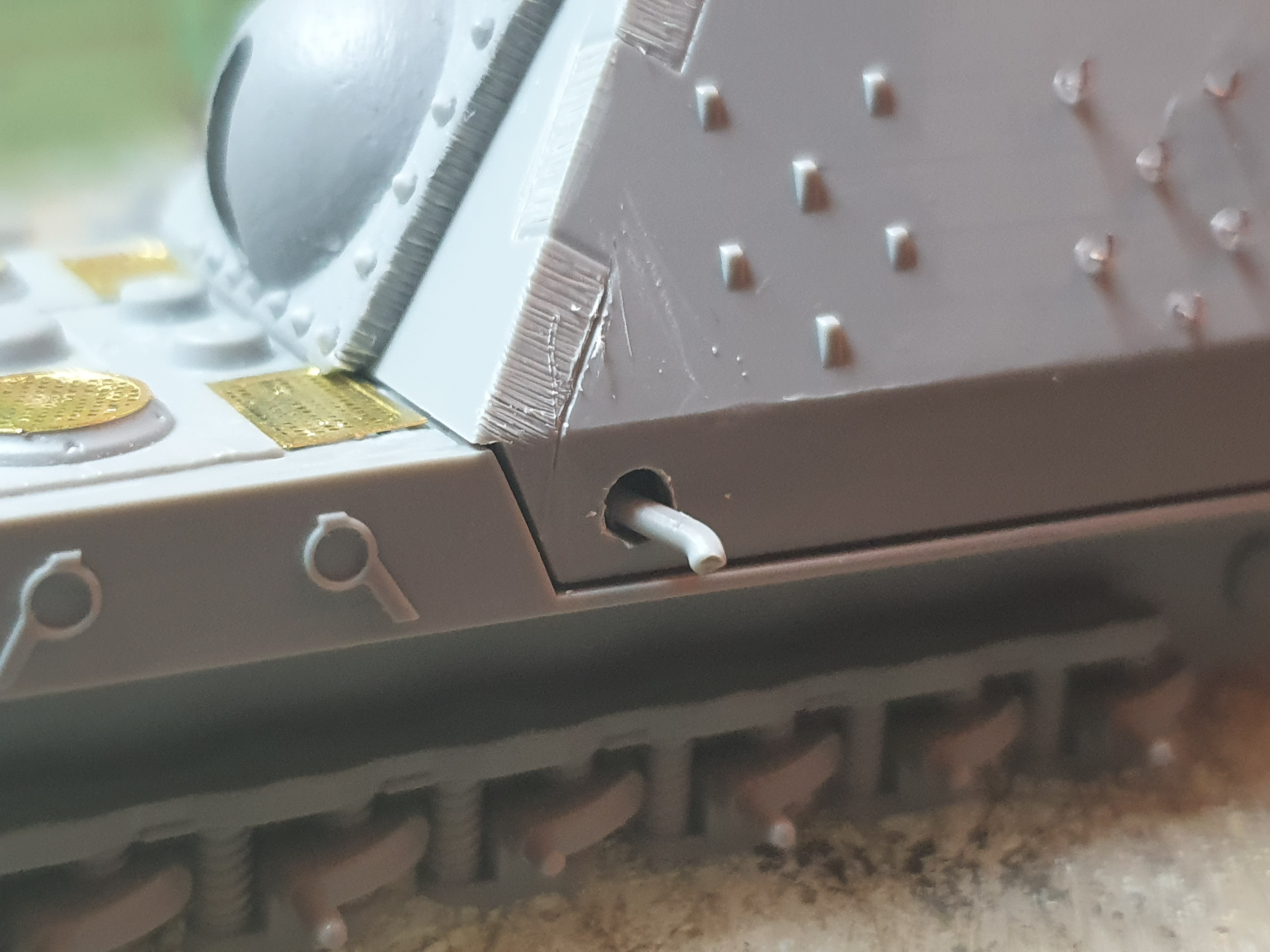 I was going to leave off 1 or 2 side skirts from each side, so this will make for an interesting additional detail.

REPLY & QUOTE
GazzaS (Gary Shively) said
I like all of the add-ons. I just wonder if some day they might have created protective fairing s for the sensitive night fighting gear.

REPLY & QUOTE
"Artillery adds dignity, to what would otherwise be an ugly brawl."

I like all of the add-ons. I just wonder if some day they might have created protective fairing s for the sensitive night fighting gear.

I reckon they would have, even just to keep the rain out of them! I was thinking of putting a small shroud on the IR receiver or possibly a tarp/camo net over the front of the casemate, covering the top of the NV system - but dont really want to cover the wiring details, but i still might because it could make the whole vehicle look a bit cooler.

They are a very awkward looking device, especially the rifle mounted ones!