The explanation for painting the markings prior is exactly what I thought. Looks like it works - did you disover any build up edges though?
And finally the codes with a thin layer makes sense. They look flawless and the color modulation on the camo is nice and even better visible after the wash.

REPLY & QUOTE
Sometimes you need to distance yourself to see things clearly - Lao Tzu -
... in scale and in real life -T.

The paints you are using appear to be very promising with the shades .

Thomas! It worked well but the Hataka paints had a lot less coverage than I am used to so I got a bit of paint build-up from the camo instead and also had a bit of surprising difficulties to cover the overspray from the markings!

Terri! Colours are good but please see caveat about covering ability above! Over a solid, grey or white, primer they perform flawlessly though. 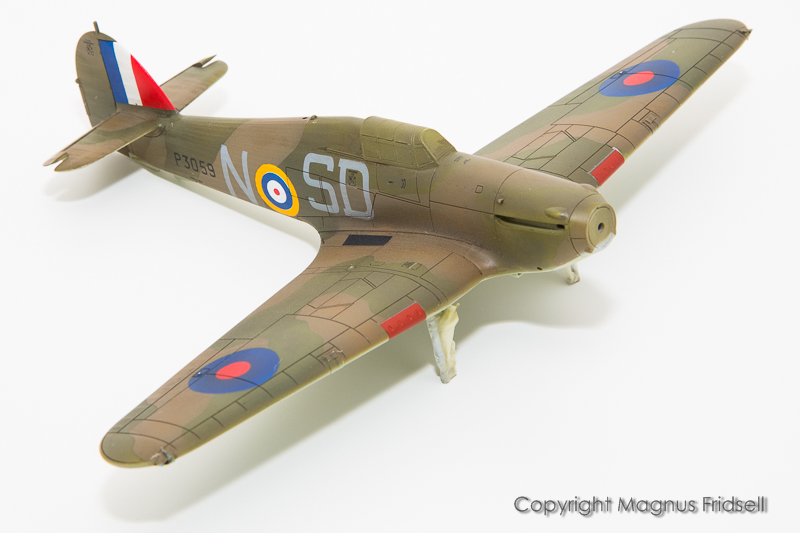 The dreaded decals are on... 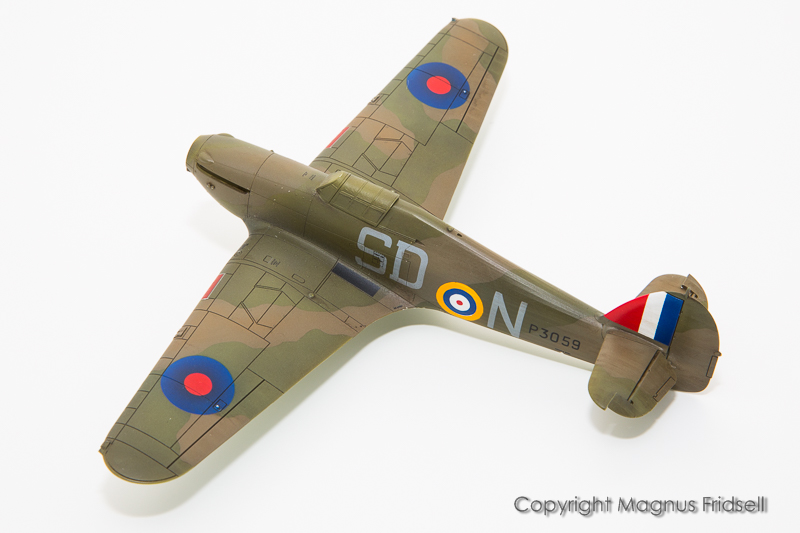 ...and to be honest the Techmod decals performed well!

It got a coat of satin varnish this morning, I will do some work with oils tonight to liven up things.

Think I have to get one of these

REPLY & QUOTE
Joel_W (Joel Willstein) said
Magnus,
I don't get over to the Aeroscale forums much these days, but this morning I did, and I found your brilliant 1/72 scale Arma Hobby Hurricane Mk I build. so I grabbed a cup of hot coffee as it's 7F degrees here on LI NY, and read through both pages.

You did your usual excellent build. But what still amazes me is your masking, both making and using. Well done my friend, as the finished process looks as the real deal certainly would have.

Russell! You know you need one

Joel! Good to see you back, I'm quite close to the finish line now! 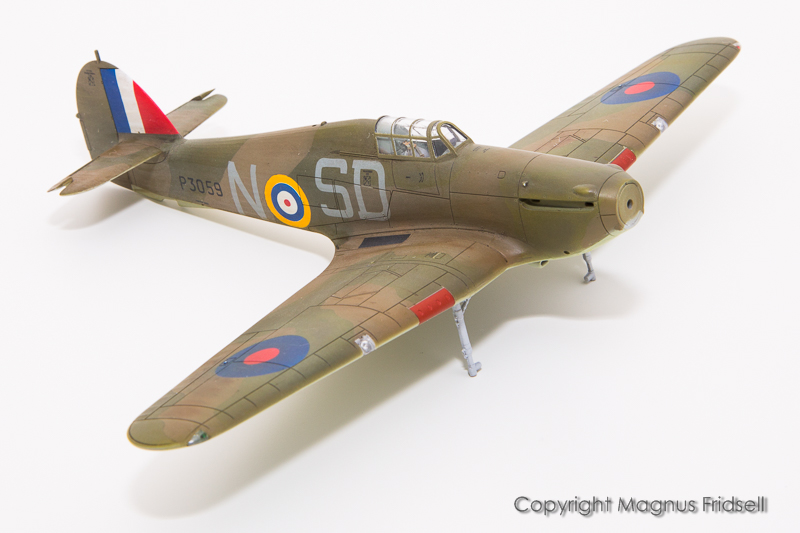 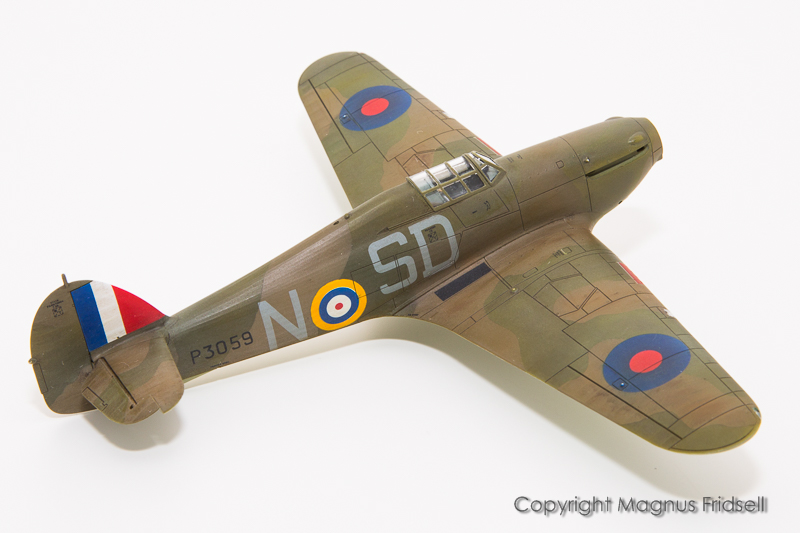 ...and a coat of matte varnish!

As usual lately, a view of my better me: I don't cheat on the lower surfaces anymore! 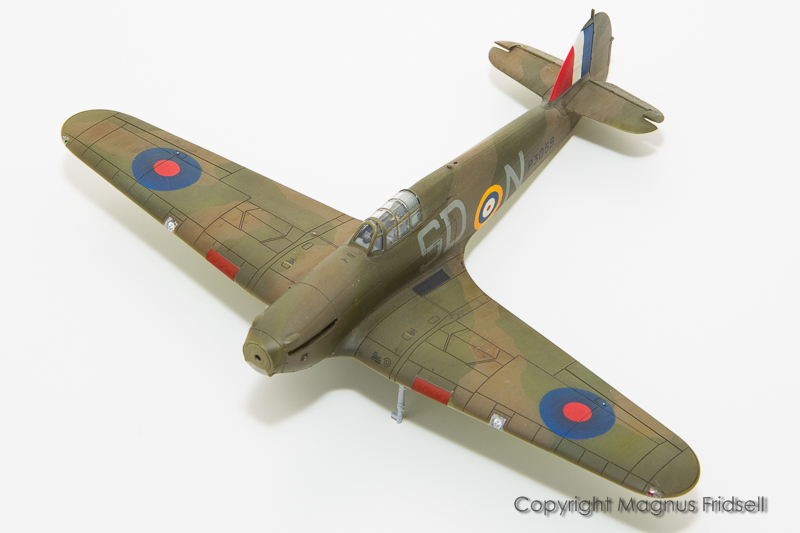 A final overview after I have peeled off all the masking, no colour seepage

This one is now as finished as they get around here (meaning that there might be some small further adjustments before bringing it to a show when it has had time to mature a bit in the display cabinet here...). 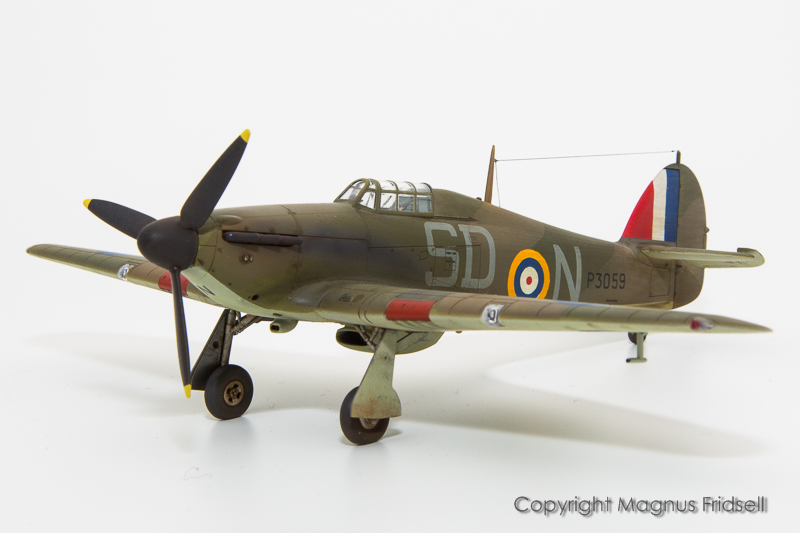 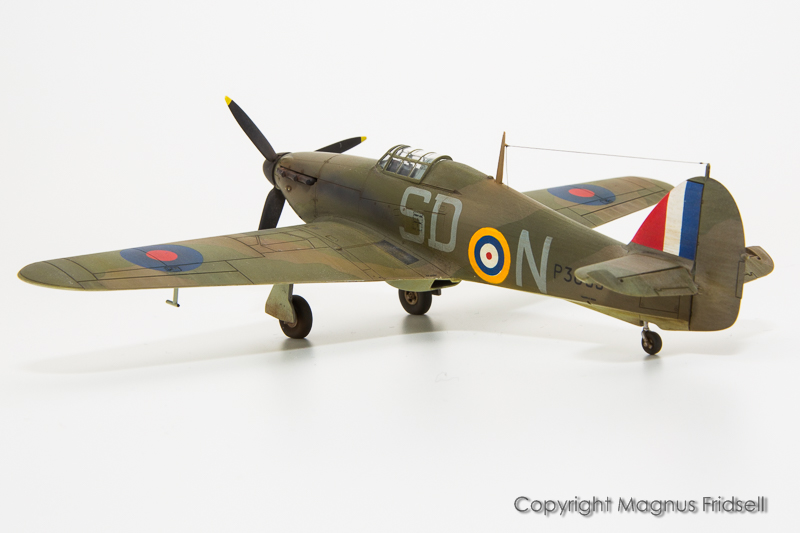 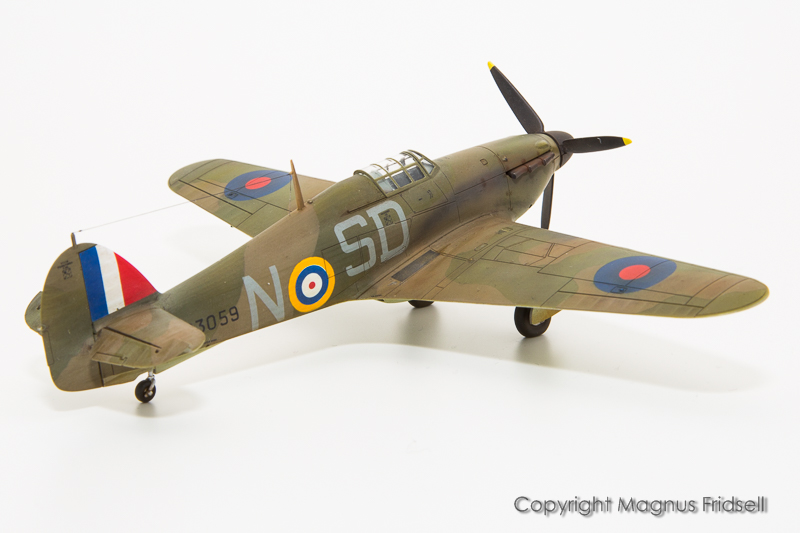 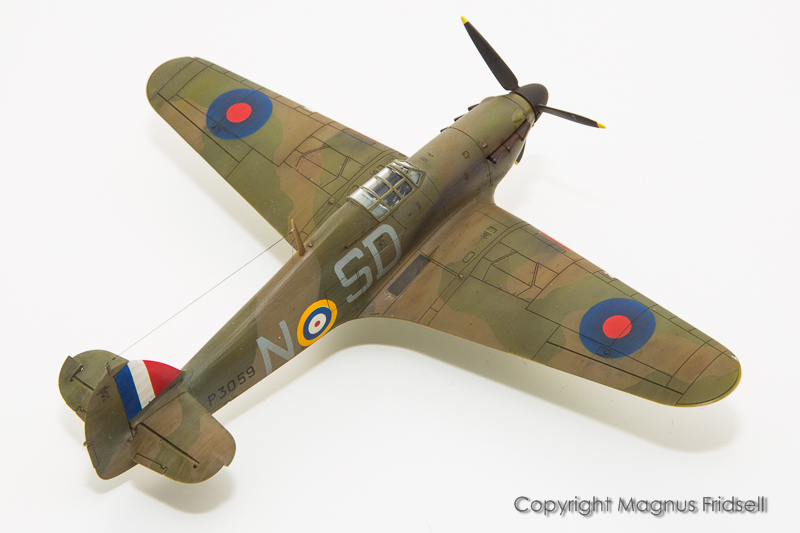 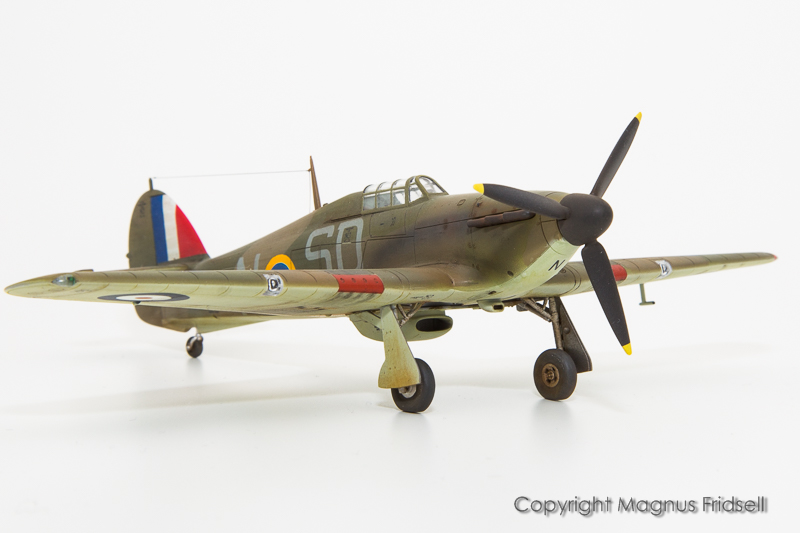 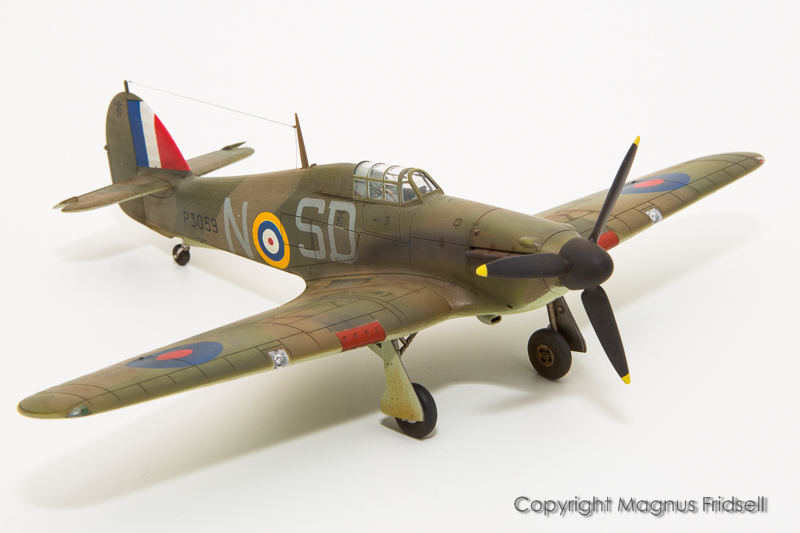 I really enjoyed this build and the final result is more than worth the effort, it really looks like a Hurricane to me!

Some small points to watch: both I and a friend had difficulties closing the fuselage due to the cockpit installation being a bit wide. We both cut one of the lower cross members in the cockpit, it can't be seen after assembly and will allow the cockpit "cage" to flex just the tiny amount needed.

Also, many other things fit very tight. Be prepared with a drill to open up things like the holes for the axles in the wheels and the fitting holes for the exhaust stubs. I do however prefer that to oversize holes and a sloppy fit! 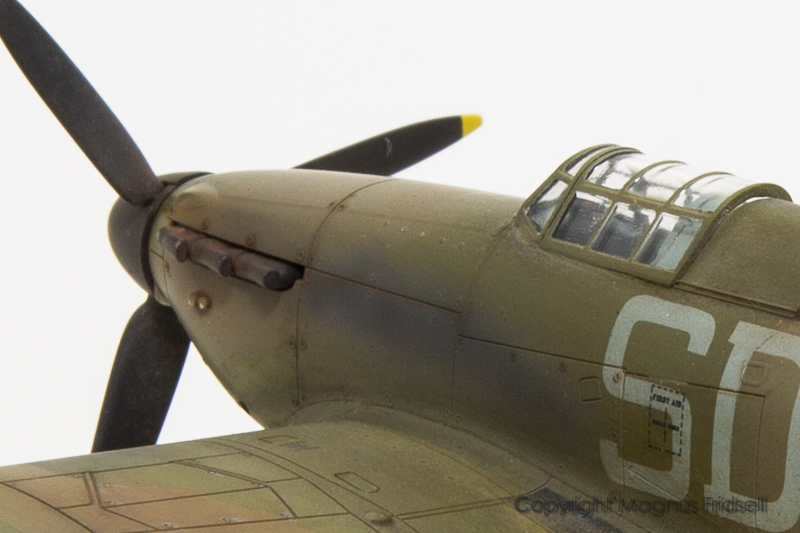 Finally, there is a faint line along the left upper side of the nose. For some reason I didn't notice it during the build process. I presume it is due to a mark in the mould (hard to fix since it would mean adding material to the mould which is always a tricky operation). As long as one knows it is there it shouldn't be difficult to remove, since I saw it after I had painted the model I decided to leave it as i was.

Get one, build it, enjoy it! Mine has now moved on to the collection.

REPLY & QUOTE
Joel_W (Joel Willstein) said
Magnus,
I'm really quite impressed with your finished build. Overall it's nearly perfect both in build, paint, masking/decals, and weathering. All elements work perfectly together. I'm sure that when you do bring it to a contest, it will do you proud.

That missed mold line is so small, that in real life I highly doubt that anyone would see it.

Definitely will be adding this kit to the stash!

Now, are you heading back to the Lanc or has another kit stepped up?

REPLY & QUOTE
Bjreg3 (Bob Johnson) said
Beautiful build. Waiting for mine to come but may have become lost in its transit to the US.

It improves much from your marking works and the time you spent though you had a few issues.
But pobably it not really matters much on how your paint sequence is. Paint build up edges could appear in any way.

Again: still quite envious about your Cameo plotter...

REPLY & QUOTE
Sometimes you need to distance yourself to see things clearly - Lao Tzu -
... in scale and in real life -T.

REPLY & QUOTE
magnusf (Magnus Fridsell) said
Friends! Thanks a lot for your kind comments and Bob, I really hope your's isn't lost in transit, it would be a pity! As for the Lanc, my heart isn't really in it for the time being but it will get finished one day!

REPLY & QUOTE
Antilles (Oliver Storz) said
Magnus,
outstanding work. Looks like it will fly away in the next moment! I especially like the landing and position lights. They look like 1/48 scale. Great !

REPLY & QUOTE
magnusf (Magnus Fridsell) said
Oliver and Terri! Thanks a lot! It's a model that is very easy to get a good result from, get one if you're into 1/72!